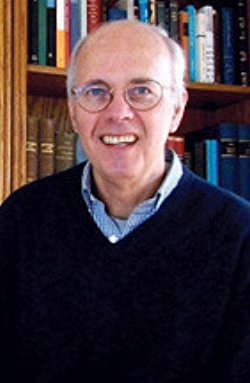 John H. Sailhamer was born in Moline, Illinois on October 17, 1946 to Claude and Belva Sailhamer. He graduated from Lakewood High School in Long Beach, California in 1964 and began his undergraduate studies at Bethel College in St. Paul, Minnesota. He transferred to Wheaton College in Illinois during his junior year of undergraduate studies before withdrawing in his senior year to return to Southern California and volunteer for the draft during the Vietnam War. He was sent to Fort Ord in California for United States Army Basic Training and was stationed at the United States Pentagon from 1968-1970 with the charge of expediting re-assignments for United States Army soldiers across the globe.

Following his honorable discharge from the Army, John Sailhamer returned to California and completed his undergraduate studies in journalism at California State University, Long Beach (CSULB). While at CSULB, John Sailhamer met Patty Engdahl, who was serving on the Campus Crusade for Christ staff at CSULB, and the two were married in 1971. John and Patty Sailhamer moved to Texas the following Fall and John began his focused Biblical studies earning a ThM at Dallas Theological Seminary. He went on to complete the coursework for an MA and PHD in Ancient Near Eastern Languages at the University of California, Los Angeles (UCLA) in 1978. During that period, John also began his work as an educator, teaching classes at LOGOS Bible Study Center in the San Fernando Valley, Western Graduate School of Theology in Long Beach, Biola College in La Mirada, and Los Angeles Baptist College in Santa Clarita.

In 1978, the Sailhamer family, now including their eldest children David and Elizabeth, relocated to St. Paul, Minnesota for John's first full-time teaching assignment at Bethel College followed by an assignment to Bethel Seminary. At the conclusion of his service at Bethel, John Sailhamer completed his first scholarly publication, a commentary on First and Second Chronicles, with Moody Press. Sailhamer was ordained by the Evangelical Free Church in 1983 and accepted a new teaching position at Trinity Evangelical Divinity School (TEDS) where he taught for 11 years.

In 1993, Sailhamer resigned his teaching position at TEDS with the intention of taking on a leadership role in cooperation with Chuck Swindoll at Dallas Theological Seminary. When that opportunity did not materialize as planned, Sailhamer served a number of institutions across the United States from 1994-1999 including the Philadelphia College of the Bible, Northwestern College (St. Paul, Minn), and Western Seminary (Portland, Oregon). This was a very productive period of Sailhamer's scholarly career when, in addition to teaching, he served a term as President of the Evangelical Theological Society (ETS) and published a number of important works including a volume on Genesis for The Expositor's Bible Commentary, The Pentateuch as Narrative, additions to the Zondervan Quick-Reference Library, the NIV Compact Bible Commentary, Introduction to Old Testament Theology, Genesis Unbound, and dozens of scholarly articles, reviews, and papers.

John Sailhamer accepted the position of Professor of Hebrew and Old Testament at Southeastern Baptist Theological Seminary (SEBTS) in 1999. The focus of his time for the next 7 1/2 years, was spent advising ThM and PhD students through the thesis and dissertation process. While at SEBTS, he submitted a draft of his last major work, later entitled The Meaning of the Pentateuch, as well as serving on Bible translation projects. The Sailhamer family returned to California in 2006 where John taught as Professor of Old Testament primarily at the Brea, California campus of Golden Gate Baptist Theological Seminary (now Gateway Seminary).

After teaching and serving in California for two years, John Sailhamer was diagnosed with Parkinson's Disease. He finished his work on The Meaning of the Pentateuch (published in 2009) and continued teaching for 1 1/2 years after his diagnoses. Sailhamer retired from Golden Gate Baptist Theological Seminary in the Fall of 2010. John Sailhamer reposed on January 9, 2017.

Scope and Contents: This collection contains instructional materials, scholarly research, notes, manuscripts, correspondence and other materials ranging from 1514-2010 (predominantly 1970-2010) that were created or collected by John H. Sailhamer. These materials primarily document Sailhamer's teaching, scholarly research, and academic service. The majority of the most valuable material for researchers is contained in Boxes 1-4 and 12-14. The other boxes contain mainly unannotated secondary literature (Boxes 5–11), although they do contain some annotated secondary literature (e.g., Box 7, Folders, 1-4, 36-37; Box 9, Folders 3, 7, 12, 16; Box 11, Folders 1, 2, and 5) and some of Sailhamer’s own notes (e.g., Box 7, Folder 18; Box 8, Folder 27; Box 11, Folder 5).

Sailhamer was a brilliant Old Testament scholar who taught at Southeastern from 1999 to 2006. He was as an expert in Biblical Hebrew and had an incredible knowledge of Old Testament scholarship. He was known for his efforts to show that the plain, literal intention of the Old Testament authors was to speak about the hope of the coming Messiah in the last days. He did this in a way that was unique, fresh, and academically rigorous. He opened the eyes of many to underappreciated literary features of the text, particularly to the strategic structuring of biblical books and complex webs of cross-referencing. He has greatly impacted a generation of his students and readers, including some of our own professors and Tim Mackie, co-founder of the popular “The Bible Project” animation studio. My own reading of Scripture has been influenced by his books more than anyone else, and in some ways he is the reason that I am pursuing an M.A. in Old Testament at SEBTS. All that to say, if you aren’t familiar with him already, you’re missing out.

So what do we have in the archives that you can’t simply get by reading Sailhamer’s fantastic books? Only 15 large boxes full of his personal papers, donated to Southeastern prior to his passing last year. There are numerous materials of interest to students and researchers in these papers. Kevin Chen, a former student of his, has written a terrific article in the latest Southeastern Theological Review summarizing the contents of these papers, and I aim to supplement his article by pointing to some specific items that stood out to me.

To begin with, there are several writings that were intended for publication but never made it to the printing press. His final book, the 600+ page “Meaning of the Pentateuch,” was shortened by 300 pages before its publication, and those longer draft pages are in our archives. There is a pre-manuscript titled “Is the Old Testament Reliable?” for a book meant to be written with his esteemed friend Walter Kaiser. There are also three lengthy bound language handouts that would be used for class, the first of which at least he had wanted to publish: A Grammar of Biblical (Tanak) Hebrew, Notes on Biblical Aramaic Syntax, and Notes on Biblical Hebrew Syntax.

Sailhamer was known as a captivating teacher by those fortunate enough to take his classes. His class notes for a large variety of courses show how he organized his lessons.  These notes cover more topics and go into more detail (sometimes with greater clarity) than his publications, and sometimes reveal progression of his thought. Many are general introduction classes, but there are also notes on classes such as “Christ in the Old Testament,” “The Old Testament Use of the Old Testament,” and “The Septuagint and the New Testament.” Of particular interest are his notes on Isaiah, the Psalms, Daniel, and Habakkuk which reveal more of his exegetical insights in those books. As Chen pointed out, his notes on hermeneutics also merit further study. Finally, one could look at some unpublished diagrams expressing his ideas and even a student’s typed notes on an entire introductory course with him.

One of my favorite finds was a BTS Department Study Paper on Isaiah 7:14. This is where to go if you want to see his most extended discussion on why this text prophecies about an individual in the last days, and he even mentions John Piper (who was also on the Bethel faculty at the time)! There are some lectures, one being a more popular level series called “The Christian and the Old Testament” that distils his perspective remarkably well. There are copies of two devotional essays that he wrote of which I was previously unaware, published in Tabletalk and Moody Magazine. We also have some correspondence in the collection, including a response to concerns about his hermeneutical approach held by Walter Kaiser, with Kaiser’s own responses annotated in the margins. Another item of interest to me was Sailhamer’s notes on the margins of a critique paper he presented at ETS on the grammatical-historical method.

Students’ access to Sailhamer’s thought at Southeastern is not limited to his personal papers however. We have also acquired his impressive personal library, stored in the Sailhamer Room on the second floor of the library. This contains many books (some of them quite old and rare) relating to the history of biblical interpretation, the Hebrew language, Old Testament Theology, and more. His thoughts can be found written in the margins of some of these books.  When viewing the book in the ALCOTT Catalog, click on the “description” tab to find out whether he has written in it. One such example is “The Lord’s Anointed: Interpretation of Old Testament Messianic Texts.”