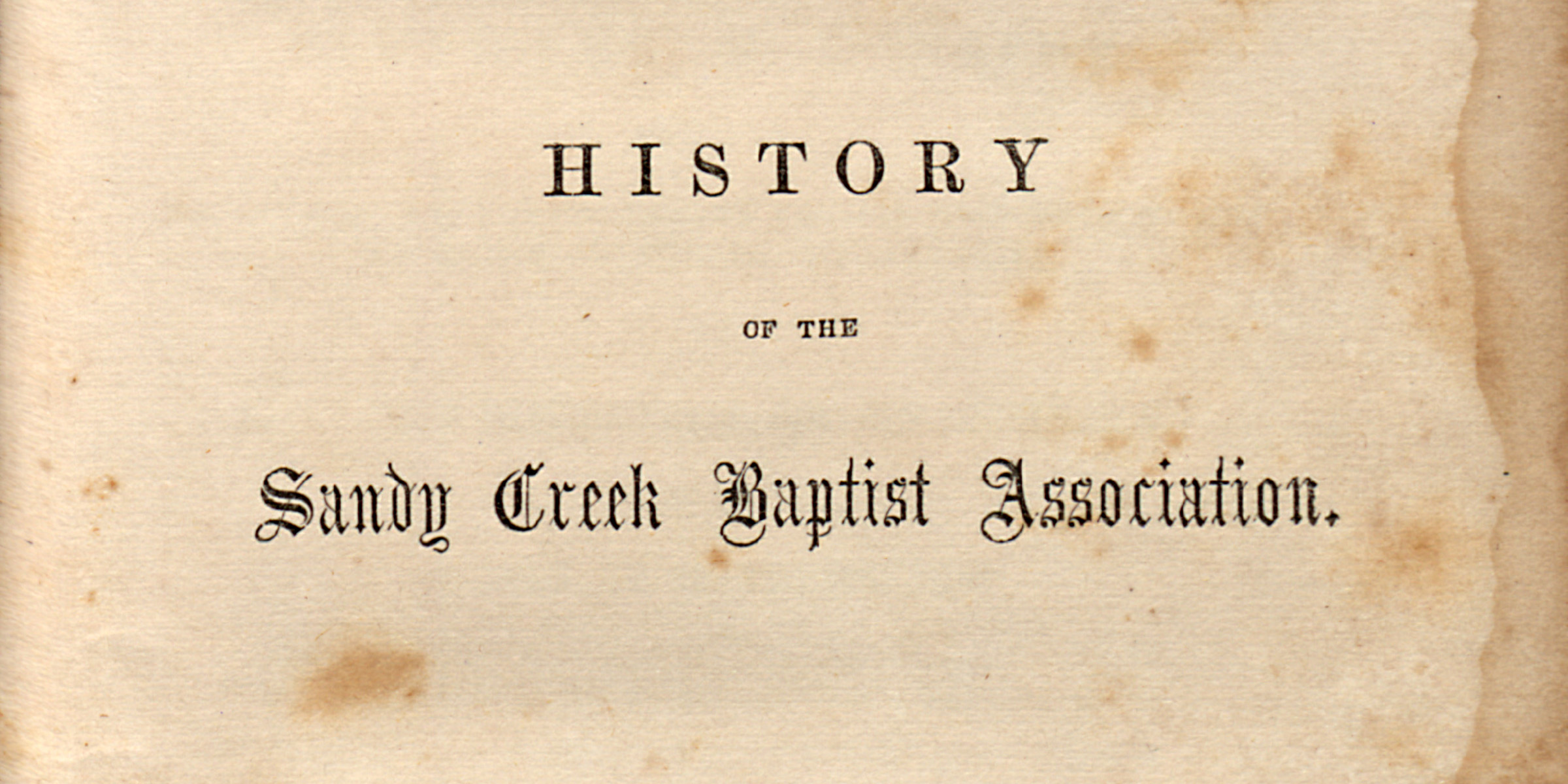 The first officers were elected in 1805 including a moderator and a clerk. There is little known of the early years due to a fire that burned all the association's records up until 1816. George Purefoy gathered and wrote on the history of the association from 1758 to 1858 which gives historical information where records are lacking. The association has a heritage of a missional focus, both international and domestic, which is evidenced throughout their records. Miss Roberta Pearle Johnson was the first international missionary sent from the association in 1915 to China. The association also played a large part in the rise in popularity of Sunday Schools in the 1830s. In the 1830s through 1850s, the association was in eager support of the American and Foreign Bible Society, the Baptist State Convention of North Carolina, and the building of a seminary which lead to the Mount Vernon Seminary.

The book, "History Sandy Creek: 1858-1958," continues the history of Sandy Creek past Purefoy's book. This book contains many valuable records of each annual session and general history of Baptist associations within North Carolina. The association kept only one moderator and a clerk up until 1972 when the first associational missionary was appointed. In 1973 Rev. Manuel Cunnup was appointed associational missionary. Cunnup contributed greatly to the association during his time. The budget grew from $1,089 in 1961 to $17,484.60 in 1978. Later the "Associational Missionary" became "Director of Missions" in 1979 and reverted back in 2001 to "Associational Missionary."

The first series consisting of the Southern Baptist Convention and Baptist State Convention of North Carolina materials predominantly falls between the 1970s - 1990s. The extent of series one is approximately 1.5 cubic feet. It consists of advertising materials, newsletters, annual session attendee packets, annuals, and books produced by the conventions. Some of the ministries highlighted in this series include the Baptist Home for Children, the Baptist Home for Aging, the Foreign Mission Board (currently known as the International Mission Board or IMB), and the Home Mission Board (currently known as the North American Mission Board or NAMB).

The second series consists of approximately 10.75 cubic feet of material produced by the Sandy Creek Baptist Association. This series contains annual reports, books of report, executive council and board meeting minutes, the "Link" newsletter, digest of letters, histories of the association and the member churches, newspaper clippings, artifacts, and ministry records for the Jubilee choir, Baptist Home for Seniors, Women's Missionary Union, and Christian Women's Job Corps. The annual reports cover the period 1874-2013. The years 1878, 1881, and 1997 are absent from the collection. The years 2014-2018 can be found in the Baptist Missions Room of the Archives.

The third series contains the records collected by the association from member churches and contains approximately 3.75 cubic feet of material. This series is listed in alphabetical order by the name of the churches. Some churches began as ministries or missions, and these were labeled as the association filed and labeled them, but some churches and missions had multiple names over the years. For clarification of the names of the formed churches, please refer to the book created by the association on the 250th anniversary. Records relating to individual churches include church bylaws, general correspondence, minister applications, bulletins, newsletters by the member churches, histories of the churches, newspaper clippings, event flyers, and directories.

Custodial History: Material held by the Association until retrieved by Archives staff December 2019.